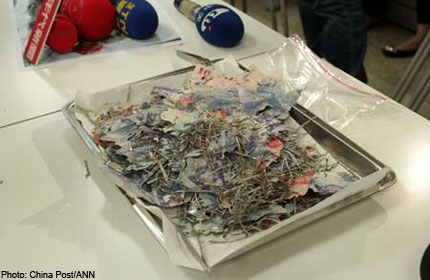 TAIWAN – A woman has recently turned to the Investigation Bureau to help her exchange bundles of damaged bills originally worth a total of NT$1 million (S$42,750) for new ones after she found the files of cash she stored in her safe had been eaten by termites.
However, the forensic expert only managed to piece together NT$26,000 in notes from the piles of damaged bills, according to a local media report yesterday.
The woman, surnamed Chen, who graduated from a Taipei university last year, was originally going to spend the NT$1 million to study abroad, according to the Chinese-language Apple Daily report yesterday.
It took her eight years of hard work to come up with the money which she stored at a safe in her house. This April, Chen found that termites had eaten most of the piles of cash in the safe.
She later sought out the Investigation Bureau for help after a bank refused to honor the bills.
The bills were sent to the bureau’s forensic unit for further examination. They will be honored based on the number of bills the experts succeed in restoring.
After spending a week trying to re-piece the notes, forensic experts only managed to restore NT$26,000 from the piles of money, the report said.