↓ Skip to Main Content
Home › Insects › Termites › Termite ID: How to Spot Termites in Your Home

Termite ID: How to Spot Termites in Your Home

Every year, termites cause more than $5 billion in property damage in the United States. Termites are known as “silent destroyers” because of their ability to chew through wood, flooring and even wallpaper undetected for years—damage that isn’t covered by most homeowners’ insurance policies.
As spring approaches and the ground begins to warm across the country, termite populations will emerge in search of new structures to invade. Starting from South to North, termite explorers, referred to as swarmers, will look for hospitable homes, with buildings that have sustained damage from severe winter weather particularly at risk. Once swarmers have determined your home to be a good fit, it’s likely that the rest of the termite colony will follow, resulting in a full-blown termite infestation.
By becoming familiar with the species of termites that are most prevalent in their area along with their habits, homeowners are better equipped to detect the warning signs of an infestation, and call A1 Exterminators to assist with termite identification before the problem gets out of hand. Here’s a handy guide to help you learn how to spot termites in your home and identify their species correctly.

Many people will see termite swarmers in homes during the spring and mistake them for flying ants; this can end up being a costly mistake if the rest of the termite colony follows the

swarmers. Winged termites have a straight waist, straight antennae and their wings are equal in size. Flying ants on the other hand have waists that are pinched in the middle, bent antennae and two sets of wings, with the top set being larger than the lower. Termites are also most likely to swarm in the spring, while flying ants may swarm at various times of the year. 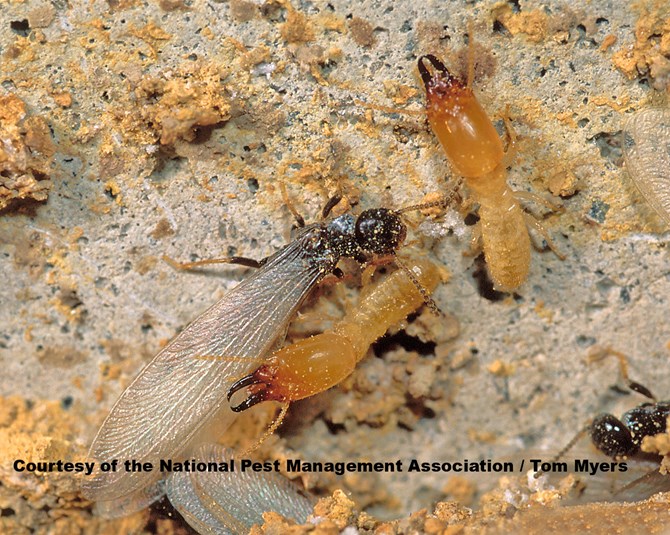 Found in every U.S. state except Alaska, subterranean termites are creamy white to dark brown or black and 1/8 inch long. They live in underground colonies or in moist secluded areas above ground that can contain up to two million members. Subterranean termites also build telltale “mud tubes” to gain access to food sources and protect themselves from the open air. This termite species is considered to be by far the most destructive of all termites throughout the United States.
It’s not always possible for an untrained eye to spot evidence of termites, but homeowners should keep a look-out for the certain signs of termites that can help identify a termite infestation.