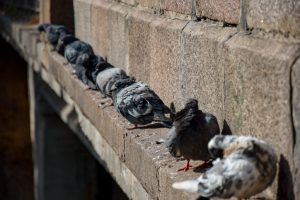 Disease risk from pigeon droppings is often used to justify killing pigeons, but fresh bird droppings have not been shown to present a health risk.

People may fear that pigeons roosting or nesting nearby, or more specifically the droppings that accompany such sites, are a health threat. These fears usually focus on histoplasmosis, a fungus that grows in dropping-enriched soil, and on diseases caused by Cryptococcus and Salmonella. However, there is little evidence linking pigeons directly to human infections.

Histoplasmosis fungus is common in the eastern and central U.S. as many as 80 percent of people tested in these areas prove to have already been exposed to the fungus without knowing.

According to the Centers for Disease Control, fresh bird droppings on surfaces such as sidewalks and windowsills have not been shown to present a health risk. People should avoid contact with any animal droppings, of course, and ordinary good hygiene, such as washing hands and leaving shoes at the door, are adequate prevention if you accidentally come into contact with animal droppings.