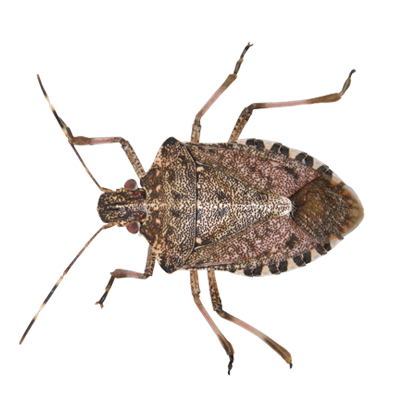 This problem really stinks! Literally. Of course, we’re talking about stink bugs who get their name because they smell really bad when they are crushed. Stink bugs are becoming an increasing problem, especially on the East Coast with the exotic brown marmorated stink bug, which was brought in from China a few years ago.
An adult brown marmorated stink bug is about three-quarters of an inch long, with a brown, marble-like exoskeleton covering its body. It has the typical “shield” shape of other stink bugs which are all a part of the insect family Pentatomidae. It has become a nuisance pest both indoors and outdoors in the United States, especially on warm fall days when it searches for a protected place to spend the winter. It occasionally reappears during warmer sunny period stink bugs throughout the winter, and again as it emerges in the spring months. As the days warm in the spring, the emerging adult stink bugs mate, and the female deposits her eggs on the leaves for fruit trees.
Beginning in May, the nymphs feed on the host fruit trees and by mid-summer they molt into adults. Since the insects are strong flyers, they spread out from around the infested area and can fly hundreds of yards at a time. Their search for a winter home typically peaks in late October. By the end of November, the stink bugs stop flying and hunker down for the winter. Where there is an infestation, the insects can be found in trees and houses.
Although stink bugs don’t harm humans and do not reproduce inside houses, their unpleasant odor makes them terrible house guests! They get their name “stink bug” from scent glands on the abdomen and under the wings. When the animal is disturbed, the scent glands discharge an unpleasant odor that spreads as the wings flap.
Mechanical exclusion is the best method to keep stink bugs from entering homes and buildings. Typically, stink bugs will emerge from cracks under or behind baseboards, around window and door trim, and around exhaust fans or lights in ceilings. Homeowners can seal these openings with caulk or other suitable materials to prevent the insects from crawling into the home. Cracks around windows, doors, siding, utility pipes, behind chimneys, and underneath the wood fascia and other openings should be sealed with good quality silicone or silicone-latex caulk. Damaged screens on doors and windows should be repaired or replaced.
Call A1 Exterminators at 800-525-4825 to help you with these tasks. We can also treat the exterior of your home to keep the stink bugs (and other pests like boxelder bugs and ladybugs) from coming in this winter. Let us help you to get the bugs out before they make a big stink!