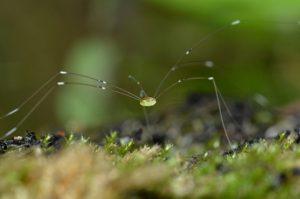 Inside structures, house spiders are most likely to be found in upper corners, under furniture, in closets, angles of window frames, basements, garages, and crawl spaces. In warehouses, they are common in corners near doors that stay open. Because of their web site selection by trial and error, many house spider webs may be constructed in several days. Dust collecting on these webs accentuates their presence.