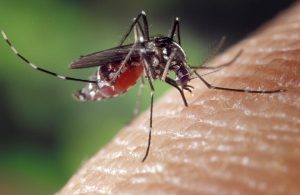 (There are approximately 3,500 species of mosquitoes, so behavior can vary)