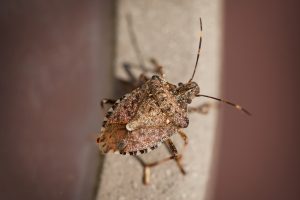 The brown marmorated stink bug (BMSB) is considered an invasive species, or a pest of foreign origin, as it was introduced to the United States from Eastern Asia in the mid-1990s. It is also referred to as the yellow-brown or East Asian stink bug.

The stink bug earned its name from its tendency to release an odor when disturbed or when crushed. Many other insects have these same characteristics, including some species of ants, beetles and other bugs.

Signs of an Infestation

Homeowners often find stink bugs inside during the late summer months and autumn when temperatures outside start to drop. Finding large numbers of live or dead stink bugs is a telltale sign of an infestation. Stink bugs will turn up on sunny sides of homes where they warm themselves. Growers often detect an infestation by the damage they cause to their crops.

If an infestation has developed inside the home or building, contact a licensed stink bug control professional to evaluate and assess the severity problem and help to identify the access points for this invasive species.