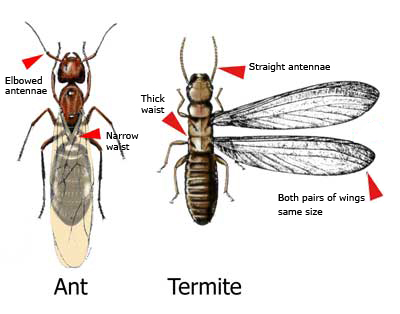 Termites belong to numerous species and this may become an additional confusion on your being able to know what a termite looks like. Among them, the subterranean termites would be the most frequent to be found in many homes. Not everyone is familiar with how they look like. But being able to correctly identify them is critical, for this would mean you would be able to save your home from considerable damage.
These termites survive on paper products and wood and for those who are not in the know, all termites could harm their library and furniture. What should be your utmost concern though are the so-called worker termites.
The termite colony consists of several groups: the soldiers, the swarmers, otherwise known as reproductives, and the workers. Most of them look like grains of rice.
The soldier termites have mandibles and the reproductive termites posses wings. Worker termites are close to the appearance of the reproductives, although they are smaller and without wings. These termites have the biggest number in the colony and they are identified as the wood eaters.
Previous/Next
Tagged with: alates, exterminator, flying ants, identification termites, soldier termites, swarmers termite, termite identification, termite soldiers, termite workers, termites, worker termites