When mosquitoes bite, they make one hole. Some saliva is injected, and then they drink up blood straight from the capillary. The bite can swell and itch, or not be noticed. Some mosquitoes spread rather dangerous diseases, like malaria or dengue fever. 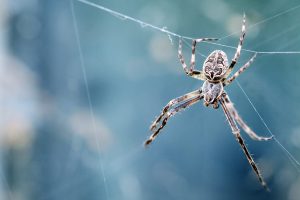 Spiders inject venom from one or two “fangs,” or chelicerae, though the two bite marks (like a tiny vampire bite) will vanish. It won’t look too different from a mosquito bite, though it will probably hurt more than itch. They do not carry diseases. Some spider bites, like brown recluse bites, are flat or sunken rather than swollen. Some bites may ulcerate, like some recluse bites after a week (no earlier!) but it won’t be as bad as legends say. Most alleged spider bites are not spider bites at all, as spiders only bite in self-defense, and necrotic bites are even rarer. A few (very few) spiders have venom that can make you sick, like the American black widow, Australian red back, and Sydney funnel web. If you start to feel dizziness, nausea, sweating, fever, chills, headache, cramps, tiredness, or joint pain after a spider bite and know you live in the habitat of a toxic species, you can look for a doctor, but let them diagnose you. If you say “spider bite,” they’ll be influenced by this and can misdiagnose your mosquito bite or MRSA infection (the leading cause of necrotic skin). Remember that the mosquitoes transmit the dangerous pathogens, not spiders!