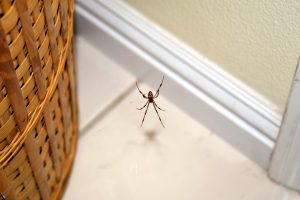 House spiders colonize new houses by egg sacs carried on furniture, building materials and so forth. They usually spend their entire life cycle in, on or under their native building. If a large number appear at a specific season, it is usually late summer (August and September)—not a notably cold time of year!—rather than fall, and their appearance coincides with the mating season of the given species. What you are seeing is sexually mature males wandering in search of mates.

The females and young remain hidden for the most part, in crawlspaces, storage areas and other neglected rooms; wall and floor voids; behind furniture and appliances, etc. Generally fewer than 5% of the spiders you see indoors have ever been outdoors.