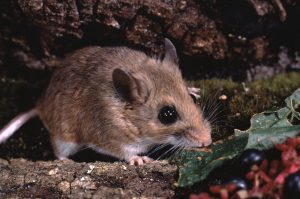 The home range of deer mice can vary from about 0.5 to 3 acres (0.2 to 1.2 hectares), but this varies with habitat quality and also over time, because the abundance of these rodents can be somewhat irruptive if food supply is unusually large. Within any year, deer mice are generally most abundant in the late autumn, and least so in the springtime. Deer mice are quite tolerant of each other, and during winter they may sleep huddled in a cozy group to conserve heat. The typical longevity of a wild animal is two years, but deer mice can live for eight years in captivity.

Depending on latitude, the deer mouse breeds from February to November, raising as many as four litters per year of typically three to five young each. Young deer mice are capable of breeding once they are older than five or six weeks. Adult males often assist with rearing their progeny.

When they are abundant, deer mice are important prey for a wide range of small predators, such as foxes, weasels, hawks, owls, snakes, and other species. In this sense, deer mice and other small mammals are critical links in ecological food webs.

Deer mice are sometimes a problem in forestry, in situations where they eat large quantities of tree seeds and thereby inhibit the natural regeneration of harvested stands. However, deer mice also provide a service to forestry, by eating large numbers of potentially injurious insects, such as sawflies and budworms.

Deer mice may also be considered pests when they occur in homes, because they raid stored food and may shred fabrics and furnishings to get material with which to build their nests. In some regions, exposure to the feces of deer mice may result in people developing a potentially deadly disease caused by a microorganism known as hantavirus. However, when closely viewed, deer mice prove to be inquisitive and interesting creatures. Deer mice are readily tamed, and they make lively pets.