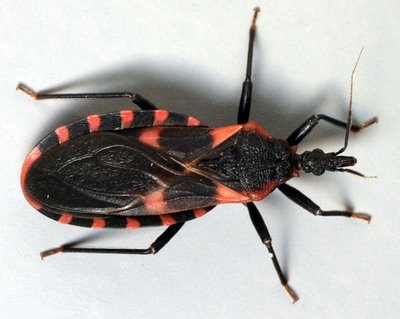 Experts Warn Of The ‘Dangerous  Spread’ Of Chagas Disease In Paper
Published May 30, 2012/FoxNews.com

In a recent editorial published in PLoS Neglected Tropical Disease, experts  from Baylor College of Medicine in Houston have highlighted the ‘dangerous  spread’ of Chagas disease, the New York Times reported. Being hailed by the  researchers as “the new AIDS of the Americas,” Chagas is caused by parasites  that are transmitted to humans by insects that suck blood.
The paper noted that nearly 8 million people contract the disease in the  Americas, mostly in Bolivia, Mexico, Colombia and Central America.   However, the New York Times reported that as many as 30,000 people living  in the United States have the disease, most of them immigrants.
The authors of the paper argued that the spread of Chagas throughout the  Western hemisphere closely resembles the early spread of HIV.  Just like  AIDS, Chagas disease has a lengthy incubation period it is next to impossible to  cure, the authors said.
Also known as American trypanosomiasis – because the transmitted parasites  are single-celled trypanosomes, Chagas disease can also be transmitted through  blood infusions or from mother to child, according to the Times.  The  disease leads to enlarged hearts or intestines, that can potentially burst and  lead to sudden death.
In order to treat Chagas disease, a victim must be diagnosed very early on and take harsh drugs for up to three months.
http://www.foxnews.com/health/2012/05/30/chagas-disease-new-aids-americas-experts-say/#ixzz1wRvwyI3u
Chagas infection is transmitted by the bite of reduviid blood suckling bugs  called Triatominebugs.  The species are black wingless insects about 20 mm in length and are commonly  known as “kissing bugs.”
When the bug bites its victim, it  releases a single-celled parasite, called Trypanosoma cruzi into the  blood stream. The parasite is closely related to the trypanosomes that cause  African Sleeping Sickness. According to The  New York Times, this explains why Chagas is sometimes called “American  trypanosomiasis.”
Read more: http://www.digitaljournal.com/article/325758#ixzz1wS2CMmEk