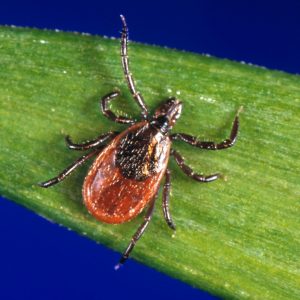 There are two species of ticks common in Massachusetts: the deer tick (I. scapularis) and the dog tick. An adult deer tick is substantially smaller than the more common dog tick, however size is not always a useful indicator since an engorged tick can be several times the size of one that has not fed.

While deer ticks carry Lyme disease, it is far better to avoid ticks altogether than to attempt to differentiate between deer ticks and dog ticks.

Deer ticks have a two-year lifespan, and have three feeding stages: larva, nymph, and adult. Eggs are laid in the spring, and in the summer they hatch into larvae no larger than the period at the end of this sentence. In August, the larva reaches its peak of activity, waiting on the ground until a suitable host brushes up against it.
It attaches itself to the host (bird or mammal), and if the host is infected with the Lyme disease spirochete, the larva becomes infected as well. Once it has fed, it does not feed again until it becomes a nymph, so larvae are not able to transmit the disease.
The larva molts and transforms into a nymph in the fall, but does not become active until the following May and remains active through July. It waits for a host to brush by then attaches itself and feeds for four or five days, engorging itself with blood until it is several times its original size.
If it acquired the spirochete as a larva, it may transmit it to its host. A nymph is only the size of a poppy seed, so it is often not noticed until it is fully engorged. This stage is responsible for the majority of human Lyme disease cases.