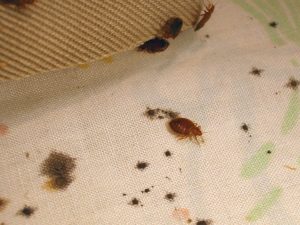 Some people believe that they are only found in developing nations, but that is not true. They are found all around the world, in Africa, Europe, Asia, North America and South America. Another common misconception is that they are only found in cluttered and/or filthy houses and motels. That is not true either. They have been found at exclusive resorts and well-respected hotels. In fact, common places where they’re found are as follows:

They are most commonly found in and around beds and other areas people sleep. As mentioned above, they may infest dorm rooms, apartment complexes, shelters, motels, and even public transportation systems such as buses and trains. Some people believe that the bugs are limited to beds, but that is not true. They can also live in couches, behind picture frames, in chair cushions, behind electric sockets and in baseboard crevices, basically anywhere around a home or dwelling.

The bugs generally hide during daylight hours and then come out at night to feed. However, they have been known to surface at any time of the day, especially if they are hungry. After feeding, they usually hide in places such as headboards, bed frames, mattresses and bed springs, underneath wallpaper and inside dressers.