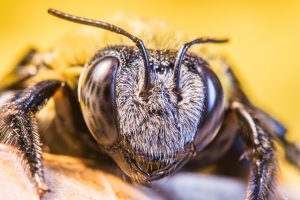 Carpenter bees, also sometimes known as wood bees, don’t have a great reputation. That’s because they are the ones (the female workers, again) that bore into your wood and make a hole as neat and clean as if it was bored out with a power drill. The presence of sawdust on sills or stoops is an indication you should look for a hole, which is the female’s reproductive nest.

She lays her eggs, females first and males last. The bees emerge from the hole in the spring, leaving in single file. The males go out first so they can be ready to mate with the females when they leave the nest.

Many people find carpenter bees destructive. The only thing that seems to deter them is painted or sealed wood. Traps are available, but these tend to kill the bees.

Carpenter bees also have the reputation of being the robber barons of the bee world. They chew into small flowers into which they can’t fit, such as those on blueberries, to get to the nectar before blueberry bees visit the flower. When this happens, they aren’t pollinating the flower; they are simply “stealing” the nectar without providing a natural benefit.

On the flowers of other plants, however, they are excellent pollinators. Carpenter bees, like honeybees and bumblebees, have pollen baskets on their legs. They also have a black body with dense yellow and black hairs on their head and thorax and a bald abdomen. If you’ve ever had a large bee swoop down and hover in front of your face, it was probably a carpenter bee. Your first thought when this happens may be that you’re under attack, but you’re not. It’s just being territorial.

Are they pollinators? Yes. “Some people consider carpenter bees pests because they drill holes or nest in wooden structures. However, their contribution to pollination far outweighs any damage to structures,” according to the University of California Division of Agriculture and Natural Resources.

Do they sting? Females can sting in defense, but rarely do. Males appear a little more aggressive and territorial, but cannot sting.

How to get rid of them: As with most bees, it’s best to leave them alone rather than trying to evict them. They may occasionally buzz your face, but they’re unlikely to sting. Paint or seal wood to prevent them from nesting in it. If they’ve already nested and you want to kick them out, try playing loud music near their nest or spraying it with a citrus repellent (boil sliced citrus fruit in water for 10 to 15 minutes, then let the water cool down before spraying it on the nest).