Carpenter Ants in New England… Spring is Their Season 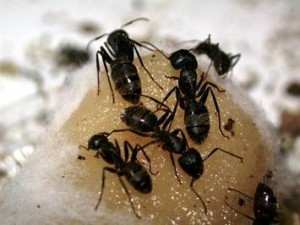 Insects are divided into three distinct body sections, head, thorax and abdomen.  Ants are related to wasps and bees and the thorax and abdomen of a carpenter ant are separated by a constriction or “wasp waist”.  Adult workers and reproductives are black, in the black carpenter ants Camponotus pennsylvanicus and Camponotus nearcticus, and in the red carpenter ant, Camponotus ferrugineus,the thorax may be reddish brown.  The black carpenter ant (C. pennsylvanicus) is one of the largest ants in New England.  Workers vary from 1/4 to 1/2 inch in length and winged reproductives, called swarmers, range from 1/2 to 3/4 of an inch.  C. nearcticus is much smaller and not as common.  Between these two in size, is the red carpenter ant, C. ferrugineus.  Ant swarmers, unlike termite swarmers, have the constricted “wasp waist”.  Their wings are brown, with the front pair longer than the hind pair.  Termite wings are all the same size.
Biology:  A carpenter ant colony consists of a queen and workers.  The queen’s role is to lay eggs.  The workers’ duties include caring for eggs, larvae, and pupae, foraging for food, as well as excavating and protecting the nest.  Established colonies are considered mature when the number of ants reaches about 2,000 individuals, usually in three to six or more years.  At this time, migratory reproductives, winged males and females, are formed.  The process of these reproductives leaving the nest is referred to as swarming.  Swarming and subsequent mating of reproductives have occurred as early as January for colonies nesting within heated buildings.  Under outdoor conditions, it is more normal for swarming and mating to occur from late spring to mid-summer.  Male carpenter ants die shortly after mating.  Only one in a thousand of the young fertilized queens will successfully establish a new nest.
Nesting Outdoors:  In nature, carpenter ants are found nesting in decayed cavities of standing trees both living and dead, fence posts and tree stumps.  The queen usually establishes her nest in a moist location, but may also use cavities that are structurally sound and dry.  Workers have been reported foraging for food at distances ranging from 65 feet to 100 yards from their nest site.  They feed primarily on honeydew, a type of predigested sap, excreted from feeding aphids and scale insects.  Other food sources include insects (dead or live) and other small invertebrates.
Nesting Indoors:  Houses located near outdoor nests are more likely to become infested with carpenter ants.  Carpenter ant nests have been found in voids in un-split firewood, hollow-core doors, ceilings, attics, and areas behind window frames and sills.  Nests are commonly associated with areas of the structure that trap moisture favoring the development of wood rot fungi.  Such areas include points at which a porch, garage or deck attach to an existing building.
Nesting often occurs in bathrooms in tile covered walls surrounding bathtubs, and flooring surrounding tubs and toilet bowls.

Activity:  Carpenter ants forage both inside and outside the house for food.  Foraging routes can be over foundation walls, along clothes lines, telephone or electrical wires, by way of railings or via branches that touch the house.  Foraging activity indoors is often in the kitchen area, under sinks, dishwashers, and refrigerators.  These ants will readily feed on many household foods.  They prefer sweets such as jam, honey, sugar, and fruits, especially overripe fruit.  Any source of crumbs, grease, or fat is also attractive.  During late winter and early spring, ants nesting within structures appear most active from late evening to early morning.  Daytime activity, has been reported during the spring, and observed more frequently during the summer.
Nest Formation:  The newly fertilized queen begins a nest by first selecting or excavating a small cavity (gallery), usually in moist or previously decayed wood, and lays 15 to 20 eggs.  She cares for these offspring until they emerge as worker ants.  After establishing this initial colony, the queen continues to lay eggs, and the workers take over all other duties of caring for the colony.  The workers expand the nest by excavating galleries in the surrounding wood, especially if it is softened by water damage or wood rot.  These galleries are chewed out, piece by piece.  The coarse sawdust is deposited outside the gallery entrances.  The galleries are irregular in shape, usually following the grain and the softer parts of the wood.  They are very smooth, having a sandpapered look to them.  The workers build more extensive galleries as the colony grows.  Occasionally satellite colonies without queens are formed, when environmental or physical conditions are not favorable in the main nest.  The workers in these colonies perform all the same duties of foraging and nest care, as if they were in the main nest.
Jody Green-Extension Entomology-Purdue University
Control:  Control of established carpenter ant colonies, either in the home or adjacent to the home can be easy or difficult, depending on circumstances.  The location of the ant colony will determine in part, the steps taken to control the ants, even if the nest is not found.  However, control can be achieved more effectively by locating the primary nest site.  Conduct your inspections when carpenter ants are most active, generally late evening during spring and early summer.

The two methods for control are structural and chemical.  Chemical control may be directed at either foraging ants or the nest itself.
Structural:  Reduce potential nesting sites by eliminating moisture problems.  Replace rotted wood, leaky gutters, and damaged roof shingles etc.  Grade the ground to prevent wood to soil contact in areas like garages, decks and porches.  Provide adequate ventilation to enclosed moist areas such as crawl spaces, attics, basements, and under porches.  Firewood or hollow-core doors found to contain a colony of carpenter ants should be removed from the house.
Chemical – Baits:  Baits are a combination of an attractive food substance mixed with a pesticide. The ants carry this food back to their nest and feed it to the workers and queen, thus killing them. There are several baits registered for general ant control.
Chemical – Sprays:  The most direct approach to controlling an ant colony with a pesticide involves spraying the ants directly while they are in the nest.  Seeing winged swarmers is a definite sign of a nest because they do not forage for food but leave a mature nest to mate and start a new colony. Annual inspections and preventative treatments can detect and destroy these nests before they reach maturity and prevent infestations from spreading throughout the home. More Information on Ant Control