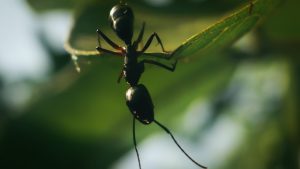 Carpenter ants build their nests outdoors in various wood sources, including tree stumps, rotting fence posts, old firewood, under stones, etc. The parent colony, or main colony, is typically located outside and contains the queen, eggs and young. Satellite nests can occur and branch out from the main parent colony and they only contain workers, mature larvae and pupae. Satellite nests are formed in mid-summer both indoors and outdoors and do not form until the parent colony matures over several years. Usually around August, the workers and winged ants will emerge from the pupae.