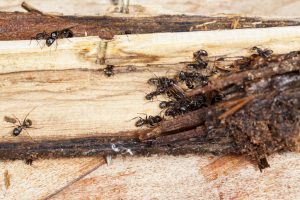 They will enter buildings in search of nesting sites or moisture and can build nests containing several thousand ants. Typically, the nests they construct indoors are satellites of a larger, parent nest located outside in a live or dead tree, a woodpile, or landscaping materials. Several satellite nests can be associated with a single parent nest, where the queen or queens reside, as in the case of C. vicinus, which can have as many as 40 queens in a single nest.

New reproductives have wings and leave the nest on mating flights in the spring. The timing of these flights varies for each species. For example, C. modoc swarms in the late afternoon, often after a heavy rainfall. After the mating flight, males die, and inseminated queens disperse in search of potential nest sites such as a dead tree or stump. Here, the newly mated queen excavates a chamber, seals herself in, and begins laying eggs. Colony growth is slow at first and only after several years does the colony reach maturity and begin producing a new generation of winged ants to begin the cycle again.