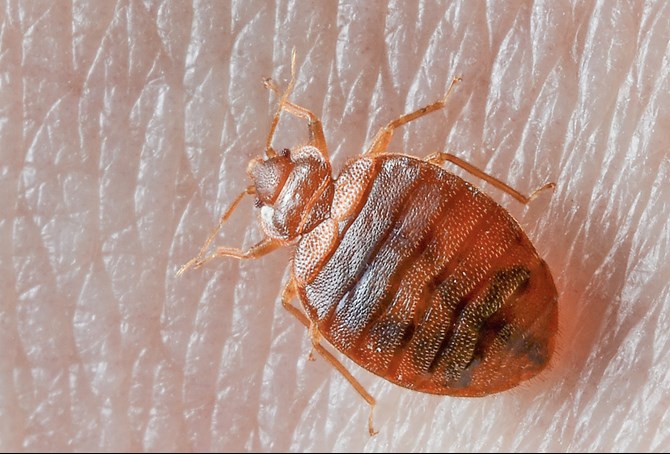 A common bedbug is engorged with blood after feeding on a human. Bedbugs are back, and they’re not just rearing their rust-colored heads in New York City. Authorities say it’s a global crisis.

SANTA CRUZ – Don’t let the bedbugs bite.
The creepy crawlers are quickly becoming unwelcome guests in cities throughout the country, and Santa Cruz is no exception.
According to the Centers for Disease Control in Atlanta, cases of bedbugs are on the rise in the United States. Thursday, the U.S. Environmental Protection Agency called for a meeting of the Federal Bedbug Workgroup. Earlier this year, New York City had a well-publicized bedbug outbreak, and last year, 537 cases were reported in San Francisco, according to the city’s Public Health Department.
The situation in Santa Cruz is not nearly as dire, but county health officials said more cases have been reported this year than before. John Hodges, environmental health program manager at the county’s Health Services Agency, said they’ve received 10 complaints this year, up from one complaint in 2009 and four in 2008.
“We don’t get complaints from everyone, but if it rises to the point of significant discomfort, we do hear about it,” he said. The increase in reported cases is as likely to be due to increasing public awareness as it is to a burgeoning problem, Hodges said. But because bedbugs don’t transmit disease – as do mosquitoes and fleas, for example – the health department doesn’t monitor them as closely as infectious vectors. However, “they are a nuisance, and there can be discomfort or a psychological factor,” Hodges said.
Ken Marks, 66, is no stranger to strange bedfellows. His room at El Centro Residential Suites on Pacific Avenue hosts bedbugs. He and property managers are working to get rid of the nocturnal pest, a process all parties acknowledge is difficult, time-consuming and costly.
“They’re everywhere, in my mattress, in boxes, in my clothes,” Marks said. “People keep telling me to move out, but I don’t have anywhere else to go – and I can’t go anywhere, not with this.”
Jane Graf, president of Mercy Housing California, which owns the property, confirmed there are bedbugs in the building and said they’re working with Marks.
“We very carefully and aggressively manage bedbugs,” she said.
At one point, Marks said he was covered with bites. Bedbug development depends on a blood meal, so the bloodsuckers burrow through a person’s skin in search of dinner. They tend to hide in dark, protected places where humans are easily accessible, and their bites can result in itchy welts or raised rashes. Adults are between 5 and 6 millimeters long – roughly the size of a grain of rice – but younger bugs are much smaller and harder to detect, and can be the size of a small coffee ground.
Often, determining the presence of bedbugs is based on circumstantial evidence, said Roberto Hernandez, owner of Cardiff Pest Control in Santa Cruz.
“We look for signs like blood spots on the sheets,” he said. “You’ll see stains on the bedding, and right around the seams of the mattress.”
Cardiff has treated Marks’ room, and Hernandez said he’s been receiving calls once a week from other customers in Santa Cruz County.
Getting rid of bedbugs is a complicated process, said Celia Brown, senior environmental health specialist with the county’s Health Services Agency. While the agency has no jurisdiction over hotel rooms, Brown follows up on bed bug complaints from apartment-dwellers. She can take action against landlords who fail to properly eradicate the bugs under the state’s health and safety code.
“I call the management and let them know I received a complaint,” she said. “Some of the places are very cooperative. Others are not so forthcoming.”
Brown said she will often do site visits to determine whether the bugs are present, and in cases where they are, recommends actions that landlords can take.
“I tell them they need to abate the infestation,” she said. “They get 30 days, but sometimes it takes longer than that.”
Eradication measures vary. Chemical treatments are effective at killing adults, but not eggs, meaning treatments need to recur every few days to catch multiple hatchings, Brown said. Steam treatments kill eggs, and washing clothes and bedding in hot water, followed by high heat in the dryer can help, too, she noted. Residents should take care to encase their mattress and box springs in a plastic, bedbug-proof cover, and make sure their residence is clean and clutter-free.
“These bed bugs are extremely difficult to get rid of,” Hodges added. “It’s something that everybody has to team up on – the landlord, the manager, facilities, maintenance, housekeeping – and the guest or the resident.”

BEDBUG FACTS
Bedbugs are small, reddish-brown wingless insects
They feed on blood, but can live for up to a year without food
Bedbugs feed at night, when a person is sleeping
They do not transmit disease
They live in small cracks and crevices in furniture, walls and floors and can thrive in a wide range of temperatures
GETTING RID OF AND PREVENTING BEDBUGS
Contact a licensed pest control company for treatment options
Frequently vacuum carpets, wash bedding and clothing in hot water, and dry on a high setting
Keep your rooms free of clutter and seal wall cracks and crevices
Inspect mattresses, especially the seams, for bugs, molted shells and reddish-brown fecal spots
Encase bed in mattress protectors
WHEN TRAVELING
Never put luggage on the bed. Instead, use the luggage rack and pull it away from the wall
Pull back all bedding and check mattress seams and box springs where it meets the frame and headboard
Live out of your suitcase rather than using the hotel dresser drawers
Ask for a new room if you see any signs of bedbugs, preferably not next door
When home, immediately wash and/or dry clothes and thoroughly vacuum suitcase, inside and out
Carefully inspect the closet before hanging up anything
By Nadia Drake — Santa Cruz Sentinel Posted: 12/11/2010 04:16:15 PM PST
SOURCE: Paul Binding, vector control unit, Santa Cruz County Health Services Agency