Tracer, a beagle, went through the Philip L. Morency Manor and the James A. Dalton Residence searching for the small, bloodsucking bugs that have made headlines across the country.

The dog, which was brought in by A1 Exterminators of Lynn, raised its paw and scratched furniture or other surfaces in 38 of the 89 apartments in the complex, which is along Bridge Street near the old Salem Jail.
“Yes, we have found bedbugs at the Morency and Dalton buildings,” said Carol MacGown, executive director of Salem Housing Authority. “Right now, we’re looking at exterminating 38 units.”

The bedbug-sniffing dogs have been used nationwide to find the tiny bedbugs, which are about a quarter-inch long and reddish brown. 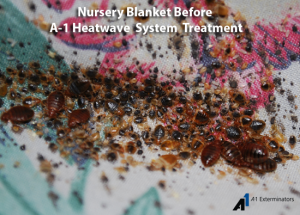 “They are between 95 and 98 percent accurate …” Jeff Weisberg of A1 said.
The SHA removed furniture from the common areas of both buildings yesterday and emptied out an apartment in the Dalton building about a week ago.
MacGown was meeting with the exterminators and her maintenance crews yesterday afternoon and said she planned to begin the buildingwide exterminations next week. Some individual rooms have been debugged over the past few weeks, the director said.
“We’re preparing the schedule as we speak,” she said. “We’ll start … midweek.”
Asked if there are any interim arrangements for tenants in the targeted rooms, MacGown said: “There’s nothing we can do … until we start the exterminations.”
John Boris, chairman of the SHA, praised MacGown for being “proactive” and bringing in outside resources on what has become a national health problem.

“It’s a big problem, not only here in Salem but around the country,” he said.
Bedbug infestations have been reported in New York City hotels, Chicago office buildings and apartment complexes in Arizona. Residents of the Dalton building first learned of the problem about two weeks ago when a woman went to the doctor with bites, one tenant said. “It’s very upsetting,” said Kathleen Burke, who resides in the Dalton building. “It’s the creep factor.” While she had hoped for speedier action, Burke praised the SHA for “stepping up to the plate” and dealing with the problem.
Burke, who is on the board of the Massachusetts Alliance of HUD Tenants, said more tenants and landlords need to educate themselves about the issue.

Bedbugs in the apartments at Morency and Dalton will be exterminated using heat, according to MacGown. Heat-carrying ducts will be run into the apartments that will raise the temperature in those rooms to more than 130 degrees, killing the bedbugs and any eggs. An A1 official said the method is safe, effective and poses no fire risk.
“We will get the temperature up and bake those units,” Weisberg said.