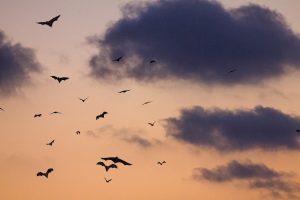 North America is home to many species of bats, but these are the three most common nuisance (colonizing) species in the US: First is the Little Brown Bat (Myotis lucifugus)which is common in most of the US, especially the more northward states. These bats are small, with a wingspan of 8 inches, and a weight of less than half an ounce. The females form large maternity colonies, often in buildings such as attics or barns. Young are born in June, and can fly by August. They can live up to 30 years apparently, though average lifespan in the wild may be about 7 years. They hibernate in the winter. The Big Brown Bat (Eptesicus fuscus) is also common in the northern areas. It has a wingspan up to 13 inches, and can live up to 19 years in the wild. They mate in October, before winter hibernation, and after a delayed fertilization and a 60 day gestation, give birth to one or two baby bats in early June. The Mexican Free-Tail Bat Tadarida brasiliensis is common in the south. It has a wingspan of about 8 inches, a weight of half an ounce, and can live up to 16 years. These bats will form huge colonies, up to several million members in some cases. They mate in the fall, but delay fertilization, and one pup is born in early June, and can fly about eight weeks later. All of these bats often roost in man-made buildings, and love the attics of homes. None of these animals are actually blind, but they do use echolocation in order to aid in navigation on the wing. They are all insectivorous, catching insects on the wing.