Amazing Facts about the Pigeon 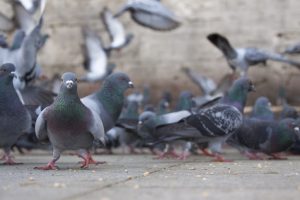 Pigeons are incredibly complex and intelligent animals. They are one of only a small number of species to pass the ‘mirror test’ – a test of self-recognition. They can also recognise each letter of the human alphabet, differentiate between photographs, and even distinguish different humans within a photograph.

Pigeons are renowned for their outstanding navigational abilities. They use a range of skills, such as using the sun as a guide and an internal ‘magnetic compass’. A study at Oxford University found that they will also use landmarks as signposts and will travel along man-made roads and motorways, even changing direction at junctions.

Pigeons are highly sociable animals. They will often be seen in flocks of 20-30 birds.

Pigeons mate for life, and tend to raise two chicks at the same time.

Previous/Next
Tagged with: Facts about the pigeon, pigeon